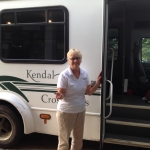 The content of this page will be republished in revised form when the Covid 19 virus situation is deemed under sufficient control to again allow group transportation.

The goal of the Transportation Committee is to ensure that there are sufficient transportation resources to meet the needs of residents so that the later stages of life bring new opportunities for growth and development even as emerging challenges bring some loss of independence. Those transportation resources include public transit, private providers, Kendal-Crosslands vehicles, resident-owned vehicles, and the vehicles of other organizations in the wider community.

To achieve this goal, the Committee advises, partners, advocates, and collaborates with all who provide transportation services that enable residents to move around within the Four Campus Kendal-Crosslands community, and in the wider community, in ways consistent with Kendal-Crosslands values.