Kanta Bhatia:  At the new exhibit at the Chester County History Center in West Chester, Kanta is in good company in this photo wall celebrating distinguished people (including Bayard Rustin & Sam Barber ) important to our history. (click photo to enlarge ) 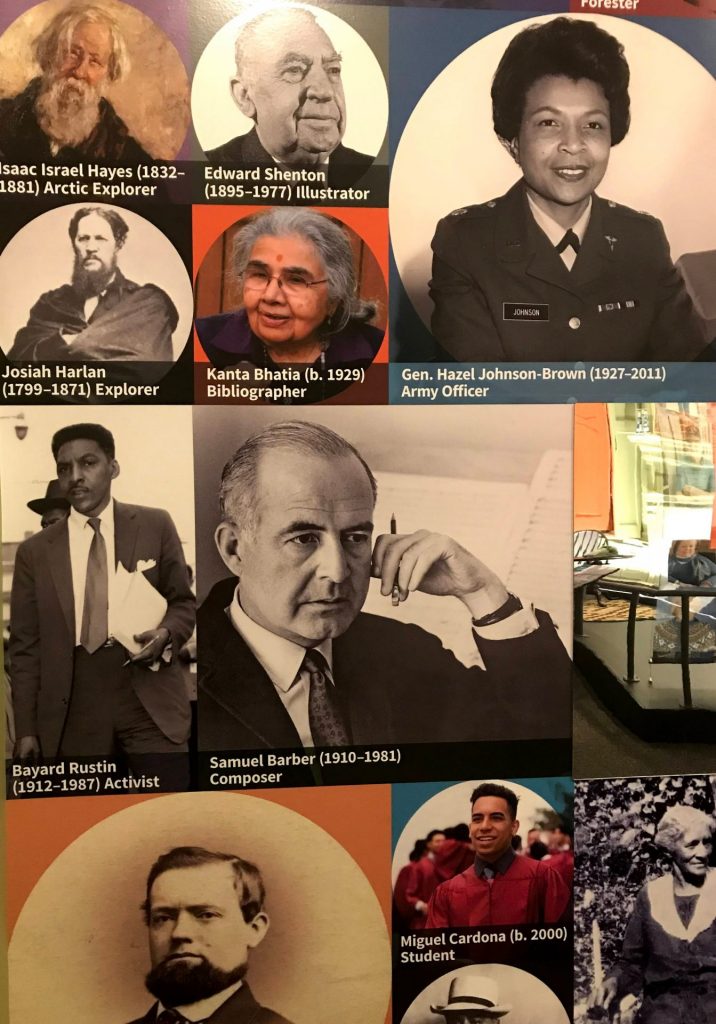 Clara Stites: Clara has published a new collection of twelve short stories, Do No Harm, which is now in the Gateway Shop. Kip feels it is nicely relaxing. He reads a story before bed or whenever he needs a little break from election news. 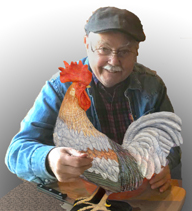 Don Vassallo: Don, born and brought up in Waterbury CT, is a retired researcher from DuPont. He describes himself an “artoholic,” trying his hand at etching, silk screen, watercolor, acrylics, oils, wood cut, fish prints, lithography, papier Mache and ceramics.

For twenty-five years he combined his long-term interest in birding and art into decorative bird carving and later to other forms of sculpture. In that time he carved over 150 different bird species and created over 600 pieces of bird sculpture. This culminated in the creation of a State Birds collection, including some with state flowers and the US Bald Eagle. The collection illustrates birds created during stages of this career as well as differing sculpting media, styles and sizes. The collection can be seen in an exhibit at the Delaware Museum of Natural History now through Nov 29 and possibly longer. Because of the pandemic reservations are required and are obtained at the Delaware Museum of Natural History website.

Larry Kirwin: Since the lockdown I wrote my fourth novel “Ellie’s Journey” which can be found by opening Amazon and typing Lawrence Kirwin. It is a sequel to “Damn the Dust”. A couple of folks here have helped with content and editing. I had fun writing it. Enjoy!–

Louise Bennett for her newly published collection of short stories about refugees in America, The Blue-Eyed Tiger. Informed by Dr. Bennett’s life and work as a physician in Africa and in Rochester, NY, her book pulls the reader one story at a time into the reality of their daily struggles. Inspired by her refugee patients and written from their point of view, these stories help the reader identify with not only The Blue Tiger’s characters—a 5-year-old Somali, a Burmese teenager, a Liberian woman and her lead poisoned child, etc.—but also with real refugee children and their families. The book launched January 18 at the Kendal Farmhouse and is now available in the Gateway Shop, as well as through Amazon books and Blurb.com. On April 15, Louise will be reading at the Kennett Library meeting of its International Book Club.

Owen Owens -Was honored by the Nature Conservancy for his work on restoring Harlan Glen. 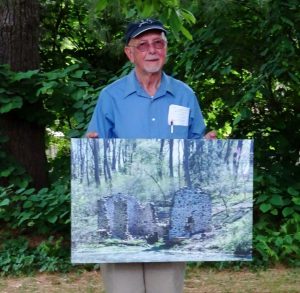 He was featured in an article, “In the Flow” in the Summer issue of THE HUNT magazine.  It  spotlights conservation efforts and his fly fishing in our own Bennett’s Run.

Kanta Bhatia presented a workshop at the Scarsdale Teachers’ Institute on March 8 on Indian culture, her experiences during the partition of India and creation of Pakistan in 1947, and as a refugee in India and a immigrant in the United States.  The Workshop was in connection with Scarsdale High School’s decision to establish an Exchange Program with Prabhu Dayal Public School (Kanta’s father’s school) in New Delhi. Ten teachers will be visiting India in August to work out the details.

Shoya Zichy’s personality model Color Q is being used to help women develop their careers in Saudi Arabia through seminars by local Saudis.Who would have imagined!

Arlene and George Rengert recently attended the LaundryCares Literacy Summit, held March 19-20 at Chicago’s Union League.  Three organizations sponsored the event, the LaundryCares Foundation, an outreach arm of the national organization of Coin Laundry Owners;  the “Too Small To Fail” initiative within the Clinton Foundation; and the nonprofit Libraries without Borders.  Representatives from over 35 organizations concerned with children’s literacy presented and/or spoke on panels, including Arlene who represented the Laundromat Library League.  (See www.laundromatlibraryleague.org)  Keynote speakers included Chelsea Clinton, who also did a demonstration story-reading to children in a Chicago laundromat.  Read more about it in the Chicago Tribune:

Here’s a link to an autobiographical piece by Jim: The Complete Sherlock Holmes as a Frigate

Some people here at Kendal have read my book “Decoding Dylan,” about singer-songwriter Bob Dylan. I recently recorded a podcast about it and I thought that it would be of interest to the Kendal Community. Here’s a link to it;
http://kslu3.kslu.selu.edu/audio/rock_school/podcast/rock_school_09-19-21.mp3

A new portfolio of my floral images has just been posted, along with a description of my process, which may be of interest to photographers.
prospectusliterary.com/blog2020.php

My story “How My Dog Alfie Helped me to Appreciate Trees,” has now been posted on the website for the magazine “The Woods Reader.” If you want to listen to me read the story aloud, this url will take you to the recording: woodsreader.com/audio-collection

The Songs that Changed Modern Culture, has just been published by McFarland Publishers and is available  on Amazon. Here is the link to the first interview with our neighbor/author:  http://thebookendsreview.com/2019/05/15/cover-to-cover-with-jim-curtis/ . Jim also has an online “processed photo” display of Longwood Flowers and has received word that a portfolio of photographs of Frank Gehry’s Guggenheim Bilbao Museum has been accepted by the Stillpoint Arts Quarterly.

Some of my best work as a photographer has just been posted. It’s beautifully presented.
https://www.twentytwotwentyeight.com/single-post/2020/09/25/Selected-Photography-by-Jim-Curtis 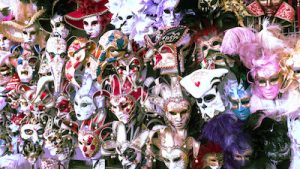 Jim Curtis reports that the photography website Viewbug has awarded his photograph “Masks in Venice” the honorary status of Legendary.

Jim Curtis: His photograph of jellies, formerly known as jellyfish, is featured on the masthead of a poetry website called Subterranean Blue Poetry. See subterraneanbluepoetry.com.

And, his book on Stalin, “Stalin’s Soviet Monastery. A New Interpretation of Russian Politics,” was published in late September by Peter Lang.

Jim’s book, Decoding Dylan, was featured in an article in the Chadd’s Ford Junxion June 2020 issue.  He offers a new interpretation of Dylan’s writing, based upon the revelations in his memoir, Chronicles, against the background of New York sixties culture.  The article covered Jim’s experiences in writing and the events in his own life that led to his interest in the subject. See also a major essay about a new Bob Dylan song online at PopMatters.  Here’s a link.  https://www.popmatters.com/dylan-murder-most-foul-2646026318.html

Jim Curtis: I’ve been doing photography for a long time, and I’ve finally realized that what I really interested in is flower photography.
This spring I’ve been taking photographs of our and neighbors’ flowers. So…I wonder if there is anybody out there who enjoys gardening but doesn’t do photography. I’d be glad to come over, take photographs of your flowers, and send them to you in digital form. Here’s an example of what I do with flowers. The photograph below right  won the Summer 2020 Award at the photography site www.viewbug.com. Click on  a picture for a larger view. (ipdated 7-23-2020)

Jim Curtis – The Songs that Changed Modern Culture, has just been published by McFarland Publishers and is available  on Amazon. Here is the link to the first interview with our neighbor/author:  http://thebookendsreview.com/2019/05/15/cover-to-cover-with-jim-curtis/ . Jim also has an online “processed photo” display of Longwood Flowers and has received word that a portfolio of photographs of Frank Gehry’s Guggenheim Bilbao Museum has been accepted by the Stillpoint Arts Quarterly.

Kendal’s Incredible Authors, as listed in the Kendal Library List of Kendal Authors

Would you like to share your accomplishment?  Just send your very short blurb (two or three sentences is enough, but more is okay) using the Contact Form or via email to editor@kalresweb.org.

We will use committee/group achievement as posts on the homepage.  If you’ve got a picture, that’s wonderful. If not, we may have one in our file or we can use a graphic.

As always, editors have the discretion to edit or select or – after a while – remove the text, and our typical policies still apply:  no political accomplishments, no phone numbers, etc.